Although we are better known for our infographics and data visualization, 5W works on many other types of projects including graphic design, web design and development, and animations. A good example is the website and logo design we just finished for Harvest Strategies.

Harveststrategies.org serves as a resource for fisheries scientists, managers, and other stakeholders, compiling information about how pioneering management approaches can lead to sustainable, profitable fisheries and successful recovery programs for many species around the world. The site is managed by The Ocean Foundation’s International Fisheries Conservation Project.

We did the website’s design as well as the front-end development, and designed a new logo to accompany all communications by Harvest Strategies. Other past projects with this client include animations, brochures, PowerPoint templates design and a series of specialized data visualizations targeted to fisheries managers and scientists (we’ll show those in this blog in the near future).

In 2020, the world was upended by the COVID-19 pandemic. UNICEF worked to protect children and families from the virus, mitigate its effects and respond quickly to those most in need. At the same time, UNICEF continued its ongoing work for children to help ensure decades of progress were not lost.

In the last few days we have been busy updating the gallery section of our website with lots of additional samples. It had not been updated in a long time. The new images are a mix of recent and older graphics, including some of the graphics done during my years at National Geographic magazine (For those Nat Geo graphics, sometimes including collaboration with other researchers and artists).

Feel free to navigate to see a range of different types of graphics including charts, diagrams and maps. You can also look by subject or technique, and see examples of branding and graphics style guides from our consulting side. Here are some of the newly uploaded samples, in no particular order (here and on the website, click on any image for a larger version):

We are working on more extensive changes to our website, with a fully responsive and redesigned site coming up before the end of the year. It will include examples of interactive graphics and animations, and this blog will be part of the main site. In the meantime, if you are interested in additional samples or want to get in touch, drop us an email to contact@5wgraphics.com.

We don’t work on graphics about Politics very often, but in the past few years we have enjoyed doing a few assignments with the team at Politico Magazine. Politico is a political journalism company that covers politics and policy in the United States and internationally. Its coverage in Washington, D.C., includes the U.S. Congress, lobbying, media and the presidency.

The Magazine has great design and illustration, led by Creative Director Janet Michaud. On occasion of President Trump’s State of the Union speech and his perennially low approval rating, we are unearthing our most recent graphic for the Politico 50 Survey, published every September. The yearly survey is a questionnaire that aims to provide a glimpse into the opinions, predictions, fears and hopes of the most influential minds in American politics.

In the last year we have been working on multiple projects with UNICEF USA, including maps, graphics, style guides and reports. We recently worked on the infographics and charts for the 2017 Annual Report, as well as the Annual Report for UNICEF Kid Power. With a UNICEF Kid Power app or wrist band, kids transform their physical activity into lifesaving nutrition that UNICEF delivers to severely malnourished children around the world. (the UNICEF Kid Power Band was named by TIME Magazine as one of the ‘Best Inventions’ of 2016).

As we did in the 2016 Annual Report, we worked under the creative direction of UNICEF’s Anna Christian to create a series of simple, bold data and information visual summaries.

The Data Viz Project is a new online catalog of different types of charts created by Ferdio, an infographics studio in Denmark. It’s a useful resource to help decide appropriate types of visualization for any given dataset (another thing is to decide which one will be the most insightful and revealing when you have multiple options). You can view and sort by type, function or shape.

Each type of chart includes a description, a good gallery of real-life examples, and a very simple description of the type of data input needed to create that type of chat, in a table format (what you would input in Excel, for instance).

The Data Viz Project is the latest of many efforts to classify and catalog different ways of visualizing data. Another excellent online resource is the Data Visualization Catalogue, developed by Severino Ribecca, which we often show in our workshops.

Ribecca teamed up with Jon Schwabish in another project to create the Graphic Continuum, a nicely designed poster taxonomy of different types of charts, and how they all relate to each other. You can read more about it here. 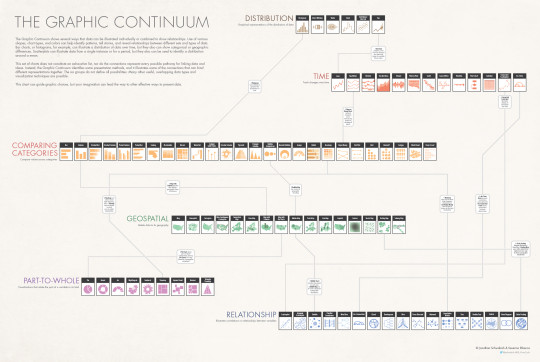 And here is yet another similar effort by Andrew Abela, which shows different possibilities depending on your purpose when showing the data.

Here is one by Anna Vital that is not strictly about charts but is interesting because it looks at visual analogies and metaphors that can help us think of ideas to visualize information.

If you are looking for a truly comprehensive reference guide on different types of visualization with charts and maps, our hands-down favorite is still the book Information Graphics: A Comprehensive Illustrated Reference, by Robert L. Harris. The 450-pages book is a massive reference encyclopedia with hundreds of entries, examples and cross-references about different chart, map and diagram types, as well as statistical and visualization methods. The latest edition is from 2000 but it’s still the “Bible” of reference on visualization.

We recently finished a nice project designing the infographics and charts for the 2016 Annual Report of UNICEF USA. We worked under the creative direction of UNICEF’s Anna Christian to create a series of simple, bold data and information visual summaries.

When it comes to create data-driven interactive infographics, charts and maps for the web our tool of choice is D3. This JavaScript library can connect data to graphic elements in the page and create data-driven, dynamic transformations for them. The possibilities are enormous. D3 was created by Mike Bostock, a computer scientist at Stanford University. Until 2015 he was also working at The New York Times creating some of the best interactive graphics out there. According to Martin Velasco, our Director of Web Development, “D3 is possibly the most powerful and flexible tool out there for creating sleek and precise data visualizations for the web. We really enjoy working with it”.

During the last few months we had the opportunity to experience once again the power of D3 while developing several  graphics for Urban Institute, a think tank in Washington D.C. that do research on economics and social policy. One of the more interesting is this data-intensive electoral map that connects the recent election of Donald Trump to several social indicators of financial insecurity. It is truly remarkable how D3 allows you to work with massive amounts of data (about 50,000 in this case) and transform them into beautiful rich, smooth-moving graphics. We are looking forward to more D3 work.

During the two-year research for our book LOOK INSIDE we discovered many amazing illustrations and artists that, for one reason or another, did not make it into the final version of the book. It would be a pity to leave these forgotten on a drawer, so during the next few weeks we will present here some of these masters of the cutaway.

A while ago we wrote here about Frank Soltesz, an American illustrator active from the 30’s to the 60’s, and author of a marvelous series of architectural cutaways appeared in the Saturday Evening Post. Today we want to pay homage to another artist of the same epoch: Fred Freeman.

Fred Freeman started his career in the 30’s. By this time cutaway illustrations were becoming a tool that popular magazine would often use to covey to their readers detailed information about technical topics. Commercial illustrator were often asked to produce cross-sections and cutaways for various publications, sometimes with striking results.

Fred Freeman was an accomplished American illustrator who designed and illustrated books on naval history, space exploration and other technical subjects. What impressed us most during our research was the wonderful series of cutaway illustrations he created for Collier’s magazine between 1952 and 1954, all of them for the series “Man Will Conquer Space Soon”. The spectacular, full color, spread or full-page illustrations depict in stunning detail cutaways of space stations, spacecraft, space emergency devices, and other aspects of the future of space exploration. The images illustrate the ideas of the then director of the Marshall Space Flight Center, at NASA, Wernher von Braun, a space travel visionary who was already insisting by then on a manned mission to Mars.

It is surprising and disappointing how little information is out there about such a wonderful artist as Fred Freeman. Please let us know if you have any more information about him and we will publish it as an update here.

Editors and designers of large, well established icons of magazine design like Wired and New York were stunned a few days ago when the SPD (Society of Publication Designers) gave its prestigious Magazine of the Year award to a little magazine produced by a few volunteers.

Eight by Eight is a wonderful quarterly publication dedicated to global football (soccer for U.S. followers) that has been consistently delivering beautiful design and great stories. They use a lot of illustration and striking typography. It’s refreshing to see it now that magazines hardly use great Illustration anymore. They are beautiful and add a layer of commentary on the topics and personalities involved that a photo would never achieve.

With our friend John Grimwade as contributing Graphics Director, you can always expect brilliant, clear infographics with original ideas. Regardless of whether you enjoy the sport, the work of Editor in Chief Robert Priest and Creative Director Grace Lee (the founding partners of design studio Priest+Grace, who also designed Howler, more focused on North American soccer) and the rest of the team deserved such recognition. Congratulations! Here a few nice pages.

Get our book in amazon