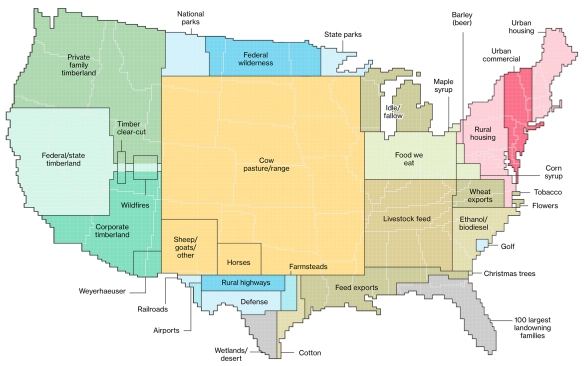 We just came across a really engaging graphics feature by Bloomberg.com. How America Uses Its Land, by Dave Merrill and Lauren Leatherby. It’s well sourced and nicely designed. As the intro states, “The 48 contiguous states alone are a 1.9 billion-acre jigsaw puzzle of cities, farms, forests and pastures that Americans use to feed themselves, power their economy and extract value for business and pleasure.” There are quite a few surprises for the reader, such as the massive amount of land used as cow pasture/range (see map above). 41 percent of U.S. land in the contiguous states is used as pasture or cropland used to produce feed.

Here is the overall distribution of land uses:

Forest and timberland take another large chuck of the space. Did you know a company called Weyerhauser Co. owns or controls an area of timberland equivalent to the size of West Virginia?