We just found a fantastic site by J. A. Álvarez (@infoiguacel) that compiles all the online winners of the 25th edition of the Malofiej Infographics Awards. You can filter by type of award, country, and readership. What a source of inspiration! Big thanks to @infoiguacel for putting this together.

The winners of the Malofiej Awards were announced a couple of weeks ago. The Malofiej Summit is held every year in Pamplona (Spain) and is still, in my opinion, the best event in the world if you want to know what is happening in the field of information graphics and data visualization. Since they are for the most part journalistic work, the graphics have a strong focused on being clear, explanatory and insightful to clarify news events. They are the “Pulitzer of Infographics”. It includes the competition of print and online infographics (over 1300 entries from 134 organizations in 31 countries participated), a 2-day conference that attracts professionals from all over the world and a three-day workshop called “Show Don’t Tell”. The workshop for professionals is taught by Fernando Baptista of National Geographic, Xaquín Gonzalez from The Guardian and John Grimwade from the University of Ohio. It doesn’t get any better than that! I was fortunate to be an instructor for the workshop for 10 years.

This year there was also a workshop for students, taught by Michael Stoll, Professor of the Augsburg University of Applied Sciences.

There is a special bonus from Malofiej. Every year they publish a fantastic book with all the award winners. There is no better source of inspiration for print and online infographics and to see the state of the art, trends and work from different countries.

This year the top prizes (Best of Show) went to Corriere della Sera (Italy) and The New York Times (USA), for the print and online categories respectively, with the graphics ‘Journey of Foreign Fighters’ (shown below) and ‘Olympic Races Social Series’.

Over the years, we at 5W have been lucky to win a few Malofiej Awards (from our previous jobs at the NY Times, National Geographic, Fortune or directly with 5W’s work. Here is my Terracotta Warriors graphic for National Geographic (in collaboration with Pure Rendering GmbH) that won the Best of Show a few years back: 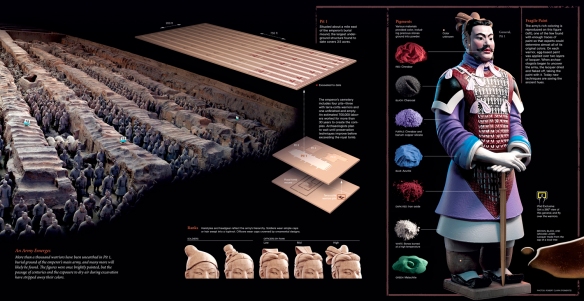 By the way, everybody asks this: what does Malofiej mean? Alejandro Malofiej was an Argentinian cartographer considered to be a pioneer in infographics, who died in 1987. The event was named after him as a tribute. The 25th anniversary is an important milestone. Here is a video tribute to Javier Errea, the President of the Spanish Chapter of SND, who has been the head of Malofiej for the last 17 years. A well deserved recognition!