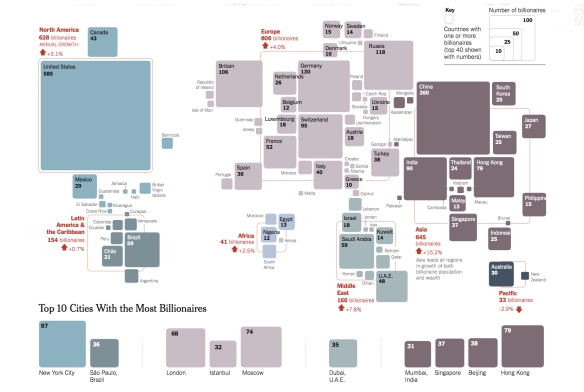 How many billionaires there are in the world, and where are they? Where do they fortunes come from, and what are their hobbies? We just published a nice full-page infographic at The New York Times’ Sunday edition answering those and more questions. It’s based on research by Wealth-X, a firm that maintains a regularly updated database of information on the superrich.

By the end of 2015, there were 2,473 people with more than a billion dollars in wealth. If we compare the combined wealth of this select group with that of entire countries (measured by G.D.P as a proxy) they would be only behind the U.S. and China, and ahead of Japan, Germany and all other nations on the world. New York, Hong Kong and Moscow top the list of billionaires by city.

The U.S. has the most billionaires with 585 followed by China with 260. Looking at continents, Europe has the largest number with 806, but Asia (645) is showing the fastest growth.

The main visual in the infographic is an stylized cartogram with the size of countries (shown by squares) representing the number of billionaires in those countries that have at least one.

It was a nice project art directed by Corinne Myller and published on a special section on Wealth on Sunday February 26.