One of our latest infographics packages is live online today. Politico have just published an in depth investigation on the safety of America’s oil and gas pipelines: “Pipelines blow up and people die”, by Elana Schor and Andrew Restuccia.

The data that Politico has unveiled reveals an appalling situation: just in the last 13 years pipeline incidents in the U.S. have killed 199 people and injured 799. Just last year 19 people died on pipeline-related incidents, injured 97, and caused more than $300 million in damage. The report goes on to reveal the incompetence of the Pipeline and Hazardous Material Safety Administration, the obscure agency that oversee the immense and outdated network of American oil and gas pipelines. It turns out that the PHMSA is controlled to some degree by (surprise!) the pipeline industry.

We helped Politico to visualize the very revealing data their research unveiled. The map below, created using Tableau Public and Illustrator, shows all the accidents involving oil and gas pipelines in the U.S. during the last five years.

We are using Tableau lately to help us explore visual possibilities with large sets of data and it truly is a useful tool. Politico is not using interactivity maps and graphics yet, which would be the natural fit when using this interactive graphics tool, but we have found Tableau exports very nicely to PDF, and from there to Illustrator.

A series of charts present various aspects of that alarming situation: 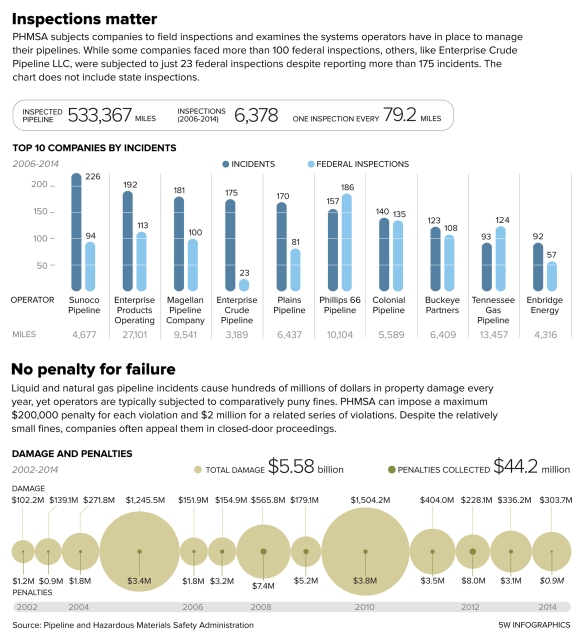 We worked with Art Director Heather Barber and had great ideas and data sets from editor Bob King and writers Elana Schor and Andrew Restuccia.